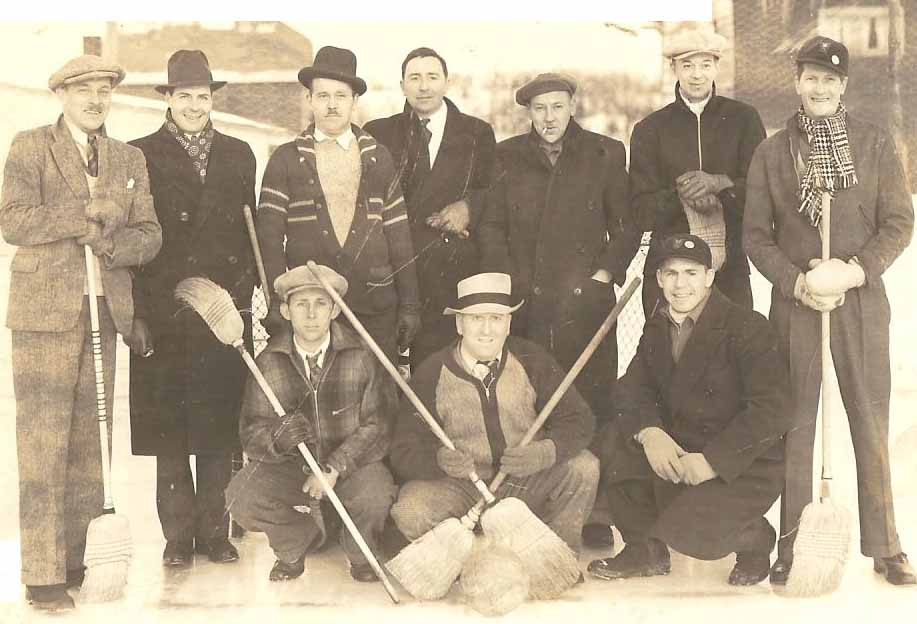 The Sport of the Future Today!

What Is Broomball?
A thousand years ago, battle-hardened Vikings engaged in a brutal, often-deadly sport called Knattleikr. Although details of the game are mostly lost to the ages, it’s known that it was played on the frozen Icleandic countryside and that the entire villages got in on the action. Matches would begin at dawn and last until dusk, tournaments could last up to two weeks and it was not uncommon for the field to be littered with corpses when the game was over. Today, many believe Knattleikr’s closest descendant to be broomball, a markedly less violent version of the sport. Most would agree that our modern day broomball developed in Canada around the beginning of the 20th Century. US broomball may have originated in Duluth, Minnesota. The old time photo that you see is courtesy of Lou Campbell the director of the Korbel broomball tourney. The group of men would gather and play on the ice by the docks in Duluth as early as 1910. Organized broomball in Minnesota started around the 1960’s. The first state championship was in 1966. Broomball in the United States started out with 10 players on the ice per team (one goalie, three defensemen, three mid linesmen, and three forwards). By 1967, the number of players was reduced to eight players per team. Some leagues still play eight-person broomball. By 1980, the rules changed to 6 players per team.

Since then, broomball has grown into a popular sport on all levels. Businesses, churches, schools and other organizations have discovered the game of broomball. It is inexpensive to play, easy to learn, and fun for everyone.

Broomball is played on a lake, a pond, an ice hockey rink or the gym floor. It is played with rules and strategies similar to those of hockey. Players can wear padded sponge-rubber shoes to enhance traction on the slippery surface. The object of the game is to strike a broomball with specially designed brooms into the opponents net.

In Your Area
Ice arena managers across the country have discovered the benefits of adding a broomball program to fill vacant ice time. Arenas in shopping malls and close to college campuses have been especially successful in setting up recreational programs in consistently empty time slots, and find them expanding into popular attractions. This strategy is not exclusive to northern climates. In fact, some of the best broomball programs exist in areas of Arkansas, California, North Carolina, Florida, and Texas.

For Fun
Recreational broomball teams are easily formed since a skill such as skating is not required to participate, and initial equipment costs are relatively low compared to those of other sports. Also, due to decreased mobility on the ice surface, men and women are able to play on a more equal basis with the ice being a great equalizer, thus making the sport more enjoyable for all.

For Sport
For those who become more serious about broomball, there is a circuit of competitive tournaments across North America. Many of these tournaments offer cash prizes for the winning teams to help decrease traveling expenses; they also provide intermediate, coed, and recreational divisions. Check out the links to the Canadian Broomball Federation, USA Broomball and the International Federation of Broomball Associations for information on these tournaments.

The Future of Broomball
The future for the sport of broomball is looking very bright with extensive play throughout Australia, Canada, Europe, Japan and the United States. So whether you are playing a broomball game with your family and friends on a frozen lake, with your church or school group in the gym, or in your local indoor outdoor league, enjoy yourself, because having fun is the name of the game in broomball.

Here is a fun highlight video from the 80's.