Moscow broomball is a sport similar to ice-hockey played by non-Russians in Moscow. It is known by its players simply as "broomball", but is called Moscow broomball elsewhere to distinguish it from the similar sport of the same name played in Canada. Broomball has been played in the winter in Moscow every year since it's inception in 1966.

Pitch and equipment
Broomball is played on a tarmac tennis court that has been flooded with water and allowed to freeze. Snow that falls on the court is pushed to the sides to create a bank that helps to contain the ball. Fenced tennis courts are preferred for the same reason, but not all courts in Moscow have this amenity. Goals of wood and wire-mesh are erected at each end of the court and a centre-spot for restarting after a goal is provided. The balls used in Moscow broomball are small soft plastic children's balls ("Disney balls"), slightly larger than a tennis ball.

Players wear protective gear to cushion falls onto the ice, mostly equipment intended for ice hockey. Padded shorts, elbow pads and leg guards are vital and no one is allowed on the ice without a helmet. Leg length hockey socks are worn over the knee and leg guards to provide increased friction compared to the smooth plastic of the pads - without these a player on his knees will slide a long way. The whole ensemble is then fastened into place with liberal quantities of packing tape. An ice-hockey helmet with a face cage is also worn.

Second in importance only to the knee pads are the broomball shoes. These are "sneaker" type shoes with thick soles of very soft rubber, to provide as much grip on smooth ice as possible (still not much!). These are obtained from suppliers in Canada catering to the "mainstream" variety of broomball played there.

Finally, each player (with the exception of the goalkeeper) carries a stick. These are made locally from the straw brushes used by Moscow street-sweepers in summer, giving the sport its name. The straw brush is tightly packed and shaped before being wrapped in many layers of silver duct tape, forming a rigid club somewhat resembling a hockey stick. Broomball sticks are much shorter, however, and are wielded one-handed. A wrist loop is attached to avoid losing the stick. Broomball sticks vary quite widely in length and shape according to the user's preference (and to some degree his ability in shaping and taping the straw). Some have large flat heads almost like miniature ice-hockey sticks, while others are curved into hook-like shapes designed control the ball much like in ice or grass hockey.

Game play
Broomball follows the typical layout of a ball-and-goal game like football or hockey - get the ball into the opponents' goal - and there are few rules beyond that, other than for safety. Feet may be used to stop the ball but not to propel it (this rule is interpreted liberally) and other than that only the stick may be used. In most games using a hand to fish the ball out of the pitch-side snow bank is accepted after a couple of attempts to play it with the stick.

Broomball is a contact sport. The player with the ball - or attempting to get it - may be tackled or barged; a common occurrence is for the tackling player to be sliding across the ice on his knees or chest and knock his opponent's legs from under him. Because of the low grip on the ice tackles do not need to be especially vicious to send players flying, to the delight of spectators. Players may hit the ball - with their short sticks wielded in one hand - from any position including face down on the ice. In fact, sliding prone with the stick held out in front is a fairly effective defensive manoeuvre.

Goalkeepers do not use a stick, and must remain on their knees at all times. They are allowed to catch the ball in their hands (although ice hockey-style oversized gloves are not used) and throw it down the pitch.

The lack of grip on the ice means that stopping and changing direction are extremely difficult. It is not uncommon for a player to fail to stop a ball that is passing only a few feet away, with plenty of warning, and instead to simply fall over as he struggles to start moving in that direction. Spectators agree that broomball is an extremely humorous sport to watch.

Broomball matches are played in three twenty-minute "periods"; players change ends for each half, and again during a "quick change" ten minutes into the final twenty-minute half. Most teams maintain a tradition of drinking together after the game and sometimes at the breaks during friendly matches.

Broomball teams consist of five players plus the goalkeeper. Substitution is allowed, but only at a natural break in the game - usually when the goalie has control of the ball and calls a change for their side. The opposition can also change at that time, but not initiate a change. Refereeing is performed by players from the league; 3 referees normally required.

Organization
Broomball in Moscow exists largely as a result of support by the embassies of several countries, particularly Britain and Germany, although foreign nationals in Moscow for commercial or other reasons now form the majority of most teams. There is a [Moscow broomball] league of 12 men's teams and 7 women's, with matches held every winter from December/January onwards - as long as the ice outside holds. The season closes with a formal Broomball Ball event in celebration of the game, season and players.

Russians
Broomball has been played by expatriates in Moscow for several decades, but Russians have never been permitted to play. This is because non-Russians are almost invariably diplomatic or commercial personnel on a three-year posting - with the continual turnover of players that this implies, the standard of play remains fairly accessible and hence new arrivals in Moscow can quickly become valued team members. The league organisers fear that if Russians were allowed to play they would soon be able to field a team of players all with many years experience that would destroy the dynamics of the league. This issue is put to the vote each year.

Abroad
The only other place where Moscow Broomball has been played is Finland. In the year 1989 the game was drifted to Finland with diplomatists. In Finland the game gained expeditious growth in a few years and skill level was relatively high among Finnish players. At its best there were 14 active teams in national league in the middle of 90s. During that time a Finnish team travelled yearly to Moscow to battle for the world championship of Moscow Broomball being many years the winner. Unfortunately the game died down in Finland in the end of 90s and last organized league was played in 2000. 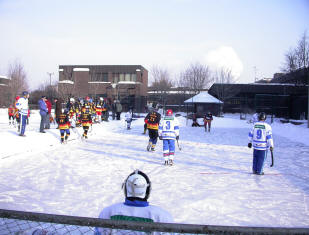